Today was/is Amelia’s 19th birthday. I tried – and possibly failed – to get a surprise going. I think she knew, but she acted along well anyway.

I went to the city earlier in the morning to get her presents – yes, I left it til the last minute. I got her a notebook in which I wrote my birthday message, and hopefully she’ll use that notebook to write down some cool dreams that she has. I also got her a box of tissues and some Strepsils because the poor girl had gotten sick just yesterday – the eve of her birthday.

After realizing that she’d be late coming into the city with Ser-, I thought I had enough time to go to the florist right outside the Town Hall and got her a small bunch of mini carnations.

In the end, her friends Ly- and Ei- actually got there before she did, so when Amelia finally arrived, they ran up to her to hug her as a way of surprise.

We went to Dessert House for some cheap lunch. I don’t really think I’m a photo blogger so I won’t post the numerous photos of food and us that Amelia took. After lunch, we went to Starbucks to sit for a bit. We sat there for ages, and Brendan and Nha- joined us, and then later on Des and Tat (they’re all, bar Brendan obviously, Amelia’s friends). Brendan and Nha- got Maccas, and Nha- was nice enough to actually get me a cheeseburger. I think I scared Ser- a bit when I more or less bullied her into taking my money to buy her drink – I just really didn’t want to hold onto so many coins. 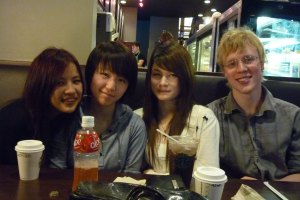 L2R, Amelia, myself, Ser- and Brendan. Ser- doesn’t like having her photo taken. This photo was after a LOT of persuasion.

After getting many glares from the Starbucks staff – one of them actually had to tell us to quieten down – we sort of all agreed that instead of going to Papa Gino’s on Lygon as was originally planned, we’d all just eat the cake in the city, then go back to Glenny to have dinner. So I made a booking at Zest 91, and went to pick up the ice cream cake from QV. Amelia cut the cake with a plastic knife, and we ate the cake with little plastic spoons.

At this point, Ly- and Ei- had to leave, so Tat and Des went to Ferntree Gully where they parked the car, so to meet us at Zest, and Brendan, Nha-, Ser-, Amelia and I went to ICUE to play some pool. Nha- is extremely good, Brendan is passable, and I think I made the wrong impression and Nha- thought I was decent, which I am not.

At 5, we thought it best to go back to Glenny. Said bye to Nha-, only to be greeted with sheets of rain. We slodged through a crossing with no lights, and found our way onto a packed Glen Waverley train – one of the few that seems to be running that afternoon. And not surprising either, seeing as already the gutters were overflowing, much less the lowered tracks.

The train ride was pretty terrible, mostly because Amelia had developed a headache, couldn’t sit down to sleep, Ser- had no sense of balance and so kept on falling onto one of us (and dislikes physical touch). I was just glad we managed to make it onto an express train that was running at all. I didn’t even consider the possibility of being stranded in the city today.

Went to Zest 91 for dinner. Sat upstairs, not after going up a crazy winding spiral staircase to get there – not the most comfortable decor idea. Met Amelia’s friends Andrew and Steven.

Oh, right, throughout the day Amelia was trying to find ways to work me into her conversations to tell her friends who I am. Her subtlety led to her telling Tat and Des “oh, by the way, that’s my girlfriend”, and telling Andrew and Steven “oh yeah, Alex, yeah, I’m dating her”.

Because the dinner was mostly Amelia’s closer friends, Brendan and I ended up having a bit of a chat with each other – something we haven’t managed in a while, and I never realized how nice it was to talk to him. It was different to when on Skype or MSN, because online he tends to do weird things and is distracted easily, but in person it was better to keep him on track.

And a huge thanks to Ly- and Jan- (the latter of which ended up having to work, so couldn’t come) for helping me organize the whole thing!