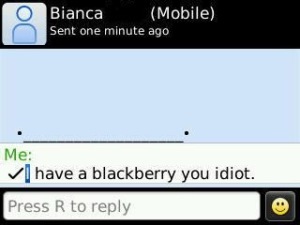 It made my day.

So it was a good day.

Okay, my excuse is that all good things started twice.

I have decided to restart my 365, starting today, the 10th of April 2010. Because the previous 9 days were sort of a confused bunch, and, to be honest, I took some on the wrong days.

I decided to start it today, because I’d just gotten a haircut (the previous haircut was getting really long and, in Josh’s words “mullet” like).

I have decided to hell with the calendar concept. I don’t have the time for that (yeah, I’m that lazy) so basically, I will take 1 picture each day, and post them up individually on my 365 page with a small description on the bottom of what happened that day.

I hope I don’t have to start for the 3rd time haha.

P.S. Group dynamics have had an interesting bashing this week. And I’m not just talking about my Uni group.

P.P.S. Mani, I just had the Two-Face conversation with you. I wish you luck!

[My Beautiful Rescue – This Providence]

Aha, so, Katherine oh darling Katherine just told me this:

And that, ladies and gentlemen, is why I love her.

This won’t be a long post. I went out with D.P. today, and then crashed Jen’s house.

D.P. took all my jokes rather well. I was basically making fun of her hair. There was one, which I particularly liked, and it went, “your hair is so big that when the wind blows, you actually slow down because they’re like parachutes.”

Anyway, she went to Sab-‘s place at around 1, so I went to Jen’s (it is so cool to have MSN on my phone, because I hopped on, saw her, asked if I could go over and within 20 minutes I was in Jen’s kitchen). One of the main reasons I wanted to go to Jen’s was because I haven’t seen her in about a week (which is how long I haven’t been out of the house. It’s not a confession I’m proud of. But the week passed quite quickly after Sorrento), and also I know Jen will give me free lunch. I saved about 10 bucks, man!

Jen cooked some pasta, and made chicken soup with chicken meat balls and some beans. It was one of the best soup-things I’ve had in a long long long time. I think it’s because it tastes like good-at-cooking. Jen said it tastes like me. I was worried.

During lunch I was looking around Jen’s living room and I was startled when I thought I saw a goldfish the size of my fist (I know my hands are small but you must appreciate, still, how big the fish would have been). I started saying, “Woah dude you have the biggest goldfish!” when I realized that actually it was a normal sized goldfish, magnified by the water and the glass bowl. MLIA? Yes.

Played Mario Kart for  a while, refreshing my dislike for Wii Mario Kart. I’m too used to the DS, and Wii is too sensitive, even when I picked Bowser for his weight, and used manual drift. Then Ash came over, and I realized it was 3:30, and I should leave. It started pouring but I dealt with it. I let my hair get a bit wet, hoping that maybe I look good with slightly wet hair. I don’t think I did, though.

Thanks, Jen, for letting me randomly drop by. And happy birthday Meghanism!

Today I went to Jen’s place just to hang out, get some stuff sorted for Sorrento (WHICH BY THE WAY IS IN 4 DAYS!!!) etc. Anyway, we went to Victoria Gardens and into K-Mart to look for cheap water guns, because I said we should have a water fight at the beach.

“But, aren’t we under water restrictions?” Jen asked.

That was a long title.

Today, instead of going to singing rehearsals (which I think now that I think about it, I was actually aware of last week, then forgot about until last night) I went out with Katherine again. We went to the city to “research” webcams, speakers etc. Also, I had to run errands.

Got to the Glen uber early because I couldn’t be bothered catching a bus so got mom to drop me off as she went to work, meaning I waited around at Maccas using their free wifi for about an hour. Got the 10:11 train, and Katherine got on at Mt Waverley. This doesn’t sound exciting. It isn’t.

Got to Melbourne Central and needed to pee. Then got Caramellatte. Still isn’t that exciting.

(What WAS funny, however, as right before I went into the bathroom I told Katherine to “stay here” and the look she gave me could only be described as “oh-no-you-didn’t-just-treat-me-like-your-dog”.)

So first of all we went to Myer to look at speakers. It took ages to find the entertainment section because we had to go down down down down.

Katherine also looked at cameras because she wants a DSLR. Anyone gonna help her out? Didn’t think so.

By the way, and this has been bugging me all day; to my friends: do any of you use Versace New Woman? Because Katherine was wearing it, and I SWEAR I know someone else who wears it but I cannot for my LIFE remember who. It would, I assume, be someone who I get close enough to smell. Just ignore how ducking perverted I sound right now.

I think that’s the bottle. Google does tend to duck with me sometimes.

Then we left Melbourne Central and went to Bourke St to head for JB. We went into Target first, and got lost. I told her to “ask the Asian chick!” but she refused to. “We can find it ourselves!” “You’re such a guy!” “What?!” “Guys never ask for directions.” “FINE I’ll ask the Asian chick!”

Then we got out of Target and went into JB. This is gripping stuff this is.

We saw the speakers that she wanted. Z4 or something? She gasped. Then saw the pricetag. She gasped again.

Well, at this point (and I just consulted Katherine who also has “NO idea”) I forgot the chain of events, so I’ll just throw in stuff that happened and hopefully the universe doesn’t collapse into itself in a mess of chronological mess.

Mess of…chronological…mess. I need to sleep.

At some point we traversed Russel St. We walked around in the shade (thank you vampirism). We walked a hell of a lot. We went to the Dirt Cheap Books store. Haha. Ha. I made Katherine look at a book about sex or something naughty starting with S. I found it funny. She found it fit to simply walk away from me. I tried calling her name but to no avail. I contemplated using the tried-and-true “MARCO POLO” tactic but felt it not emergency enough.

At some other point I took Katherine to the “secret shop” that Eunice once showed me except she’s been there before with another Alex. We looked at PostSecret books and random books. She found this book called “Wreck This Journal”. At the back of the book, it says “tape this book together, and mail it to yourself!” I think I might actually mail it to her.

At some other point we traversed Elizabeth St. That was painful on my feet too. We walked into a lot of electronic stores. Most of the time I just whinged about how Katherine doesn’t watch FRIENDS, and never has.

(I started marathon-ing Season 2 of FRIENDS again last night. I gotta say that summer when I marathon-ed it all was such a wonderful summer. Michelle, can I borrow all of them again?)

At some yet other point we ate lunch. Had an interesting conversation at lunch. It was interesting because I made Katherine talk and eat. You know she doesn’t do either in public right? Apparently she doesn’t sing in public either. I mean. Who doesn’t or hasn’t once sung in public?

At some yet other other point I ran my errand. We went to National Geographic and I got Eunice her Sea Monkeys.

At some fail point I started going up in the down escalators because my brain said, “No one is going to that one, it’s empty!”

Finally, we were bushed. We were so bushed we decided to find a place to sit down except the downstairs foodcourt at Melb Central was too hot and one of the good couches upstairs was taking by a really PDA couple (there was a lot of space next to them – they were REALLY PDA – but yeah we thought it would be WAY awkward to go sit with them).

So we went down to the Basement and found a couch to crash on. Listened to Katherine’s iPod. Then this group of guys came down and sat on the couch next to us and it was majorly awkward turtle ‘cos we just basically sat still and pretended we weren’t there. Then they left. So we had the gummy people I bought her, and I made her drop one in my mouth except she missed (I swear, oh my god, my mouth was 10 cms from her hand. She missed).

At some point after that we took the train home together after I made her take Glenny with me (the guilty puppy face actually works on her. Wow.) and we tried to solve the Sudoku except I ducked it up. Then we were doing the crossword, and 16-across was “Ass-like”. I wrote “Katherine” next to it.

I guess I can’t be bothered explaining the huge in-joke behind that except just simple to direct you towards “My Humps” by the Black Eyed Peas.

There was a clue that was “seize”. So far we had _rap___ and at the same time both of us wondered out loud, “Crapture?”

After she left I was sending her a text and I tried to write the f word except it came out as “duck”. I think that’s how I’m going to swear as from now on.

I forgot to mention this on Friday, and only remembered it now as I am doing last minute Eng Lang homework.

We were going through some answers for a past trial exam, and there was this text about the narrator’s childhood in the Darling Downs, in Queensland.

So, Miss M asks Lisa, “Why do you think the examiners chose this text?”

“Oh come on, it’s really easy; you don’t even have to think about it.”

“Because it’s written down?”

“…Okay you have to think about it a little bit.”

the life and laughs of me
Proudly powered by WordPress Theme: Publish by Konstantin Kovshenin.