It was stuffy and chlorine-y in MSAC, of course. Eunice swam…four races? Carmaine was downstairs most of the time taking pictures (with her new G10 “boy” camera) and got a good picture of Eunice just before her race started, looking athletic and awesome.

Today was the birthday of 5 people I know (6, if we count Tony 4 if we count the Double Chins as one). I said happy birthday to all of them – one of whom was Bon, who comments often! – and we basically just sat around. Julia wore a really really cute pretty tutu today, and Bel was a big red truck. We sat in this area and started attempting duets for Lucky (that is, Jen and I) and I think it failed sort of miserably. Annie kept on hitting me with a balloon which we called Balloon-da, after Julia called it replacement Bel.

Swimming sports ended with Oreads coming last (enh), Naiads 3rd/2nd and Nereids and Dryads both equal 1st. Eunice cheered my eardrums out. I did the parade with Naiads (again, I know I said I’d do it with Oreads but) and they had “Living On A Prayer” as parade music. Carmaine, Frank, Nug and I were near the back of the parade and when the chorus came on we shamelessly “moshed” and screamed “WOAH! WE’RE HALFWAY THERE! WOAH! LIVING ON A PRAYER!” and received well-earned looks from the juniors.

We went to Giraffe, a cool quaint little cafe near Elizabeth St. Dani had gone on a previous occasion and drawn a giraffe on a napkin and pinned it up. When she returned, she was shattered to find it taken off. Then she noticed that they’d placed it amongst the display on the shelves. The cafe is incredible, because it gives a very homely feeling (that is, they’ve set it out to feel like a dining room at home). We had our food and took pictures (of course. Dani, Bee and Carmaine all brought their uber-cool cameras so…). There were a salt and pepper shaker set, that was a white dog and a black dog. Carmaine, next to me, posed the black dog and the white dog facing each other, and took a picture. In the background of the picture were Dani and D.P. conversing, almost like a humanoid reflection of the dogs (look, if you know Dani and D.P. personally you’d know why). When I have the picture, I’ll put it up to show.

We went home afterwards, and who do we see on the train but Blue-Violin-Case-Boy! We talked to him for a while, and it was rather fun because we got to hear his life in Uni.

Hung around the Glen for a bit, because Bee wanted to print off photos at Rabbit Photos. I’d forgotten my house key so I had to be home after 4:30 so that mom will be home to open the door for me, so I strolled VERY leisurely home from the bus stop.

Got home, and I recorded myself singing Lucky, Jason’s part. Then I listened to the recording and sang along to that, but Colbie’s part. I’m out of key and a bit out of time but otherwise I’m happy with my efforts. And now I’m blogging, obviously, and typing up Legal notes.

And that was my last Swimming Carnival. I can’t wait until Aths. Who knows. Provided we have a do-able theme, I might dress up.

First introduced to me by Joey. Thereafter by various other people in love with the song. Now I love the song too! I just don’t have my own copy, so I will start asking around for it.

The video I have embedded is not, of course, the original music video. I’m sure you’ll get to watch the music video on Video Hits pretty soon as it will (if it hasn’t already) become very popular. This video is of Lucky being covered by those two awesome Asian folks, and both their voices are amazing!

And, just so it is made easier for other people, I’ve included the chords for this song. I got it off Ultimate Guitar, so all creds go to whoever tabbed the song (sorry I forgot your screen name!)

/edit It has occured to me that the chords are not over the right words where you change them. Figure it out, it’s not hard.

Ah, why be subtle in my titling?

Anyway, to clarify, I met the Andy half.

After school today Dani, Carmaine and I went to Dani’s place so I can tune Dani’s new guitar (all-black, acoustic, very old strings, sounds funny, looks hot) and so Carmaine can go to the Op-Shop nearby where we bought so much of Eunice’s birthday presents.

As we were rounding Coventry onto Clarendon, where FOX FM’s office and HQ is, we decided to go into the Clarendon Shopping Centre because I needed to use the bathroom. We also got some to eat, and I chatted with a Baker’s Delight worker who was an ex-MacRobbian, having recognised my uniform. All this is crucial to what happened next because a moment sooner or a moment later and today’s awesomeness would’ve been affected.

So as the three of us were walking out of the Shopping Centre, who do we pass but ANDY LEE! I stopped in my tracks, turned around and literally pointed at him half-dazed saying, “Isn’t that…?” and of course it was. We took a few steps away from the door, still saying “Ohmygosh it’s Andy from Hamish and Andy!” And I wanted a photo. We went back, and saw him ordering a sandwich. I started hovering near the doorway of the restaurant, wanting to go in to say hi and ask for a photo (Dani had her Polaroid with her). Anyway, I did about a minute of hovering as he was ordering, and then he turned around, saw me, and waved and smiled. I did the stereotypical “Hi omgsh hahaha” crap all tweenies do.

Then he came out of the restaurant, while I was still hovering and wringing my hands, and came out and smiled and said hi. I shook his hand, and had to crane my neck up HEAPS! He’s so incredibly tall. Which made me think that Hamish is actually pretty tall as well. He told me his name is Andy. I said, “I know. We know.” And then I asked him why his hair isn’t red anymore, seeing as he lost that bet and I saw a picture of him on the mX with red hair. He said he was allowed to dye it back again. Then I asked if we could take a photo, and Carmaine and I took a photo with him on Dani’s Polaroid (Dani I love you so much for letting us take one without you in it. It’s not fair you’re not in it I know. So I’ll make it up to you! Next time we see someone famous you’ll be like closest to them in a photo) BUT, as Eunice reminded me later when I called her to tell her, WE FORGOT TO ASK HIM TO SIGN IT! I AM SUCH AN IDIOT! I HAD AN INSTANT PHOTO AND I DIDN’T ASK HIM TO SIGN IT! WHAT KIND OF IDIOT DOES THAT?! I am so ashamed, I bet he even thought we were weird for not asking him for an autograph.

Anyway, said bye to him (he’s so nice. I mean how annoying would it be, 10 minutes before your show starts, you’re trying to buy a sandwich and 3 giggling schoolgirls want a photo) and called Eunice, talked to her – she was so excited she was whisper-screaming, as she was in the library. Talked to Bee – she wasn’t as excited but I suppose it’s hard to beat Eunice’s enthusiasm. Then called Yeleng. Dani called Caro- who, according to Dani, said “Ohmygod” three times per sentence. Yeleng kept on saying how lucky I was. WE WERE SO LUCKY! I bet if we didn’t go to the bathroom, or if I didn’t spend so long chatting to the ex-MacRobbian, or if something-something didn’t happen, we wouldn’t have come across Andy.

So that was a sum-up of my AWESOME afternoon! I ended up being home late for an hour, and realized I’d used my credit all up 1 month early (it’s a 2 month limit…so…oops). But still it’s so cool! Thank you so much Dani for agreeing to use up an expensive film and not being in the picture! I love you!! And I know I sound like I’m only saying I love you because you did me a huge favor but I’m sure you know how much I love you all the other times!

Keep Cool (AND LISTEN TO HAMISH AND ANDY ON FOX FM 101.9, 4 – 6pm on weekdays and I’m pretty sure they’re on weekends too! Podcast them! Whatever! Just do it ‘cos Andy’s really nice and I bet Hamish is too.)

/edit here’s the picture, I finally uploaded into my computer. 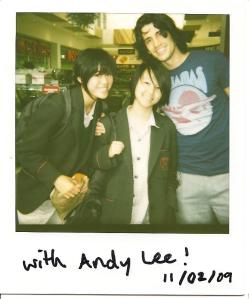