I apologize for the ghastly pun. In this post, I will explore the differences between using Bitmap (Raster) to draw and Vector based techniques. This is slightly different to my discussion on digital editing techniques, because this includes creating completely new images and shapes using different software.

In Dr Jenny Weight’s lecture, she expresses the difference between Bitmap and Vector, with the former being the more “organic” form of drawing, and the latter giving a more “inhuman” look.

I use these quotation marks because either traits really depend on the skill of each artist. Bitmap drawings can look phenomenal, even photorealistic, but can only really be so if the artist has a good grasp of how to employ the software, and a good sense of artistic creation.

Similarly, Vector art can be used to create amazing graphic designs, but the designer would need to know how to use the software to manipulate the lines to be sharp and perfect. 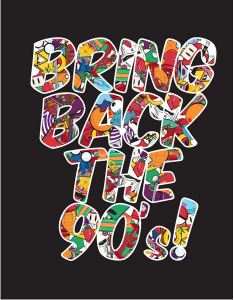 The two images above are examples of amateur level art created using, respectively, bitmap drawing and vector drawing. The drawing of Janelle Monae can be considered photorealistic, as the artist used layers of coloring to create shadows and texture of the subject. 90’s Kid (sic) features less texture, rather opting for blocky, cartoony coloring linework.

Neither approaches are in any way ‘easier’ than the other – to create beautiful artwork on either format requires a good set of skills in utilizing the software, and an eye for detail. It is perhaps easier to edit photos using bitmap tools than vector tools, however it is infinitely better and cleaner to use vectors for graphic design purposes. Often, a project would require the usage of both styles of drawing and editing (such as, for the hundredth time, the art tests that I did in the previous posts).

Note: The two images above are displayed with the permission of the original creators. Clicking on the image will bring you to the original page where the art was uploaded.

In this post, I will engage with Dr Jenny Weight’s introductory post on using photo editing software. In particular, I will draw on my own experiences with both GIMP and Adobe Photoshop, and examine the issues that may come with using said software for image editing.

Before I start, I should clarify that I’d had intermediate knowledge of PS (Photoshop) from a previous VE&T course, and have long since ingrained the knowledge into my brain-space. That means that it’s become a little difficult for me to thoroughly and critically engage with such a basic overview in digital image editing, because none of the knowledge occur to me as new, nor do issues register on my radar because I automatically know how to fix them.

Before I launch on my tirade on GIMP, it is important to note that the software is completely free, and, for most casual intents and purposes, has all the features of the extremely pricey Adobe Photoshop. GIMP also has an extensive community that discuss and help each other out on the forum, where almost all the questions a new user would possibly have (mine usually began with “where can I find…?”) are answered.

In one of Jenny’s lectures, she mentioned that GIMP has a steep learning curve. To that, I say: yes and no. For someone who got used to the way Photoshop worked, and where things were and what they were called, the learning curve wasn’t so much steep as frustratingly ‘almost’. Toolbars and menus were almost but not quite in the same place, and the UI (user interface) was almost but not quite identical, meaning I sometimes found myself hitting “B” repeatedly to access the Brush tool, only to have nothing happen.

But for users completely new to the image editing scene, I think GIMP would be as confusing as a first session with Photoshop. It’s simply a new skill to think in terms of Layers – “what, you made a mistake drawing on the image, and when you erased it everything was gone? Yeah, should’a used layers” – and all the menus with “Curves”, “Color Balance” and oh, the FILTERS! Not to mention all the doo-dah over Opacity, Layer Styles, Vectors…GIMP doesn’t do anything to ease that initial vertigo, but neither did Photoshop, for me.

The major difference, at least to me, was the way in which Adobe set out an intuitive UI once the ball had successfully been rolled. Once I learned how menus were organized, and some keyboard shortcuts, Photoshop suddenly became quick and easy. GIMP (and again, this is tainted heavily by my PS leanings), on the other hand, was not. The very fact that I had to download and install scripts to use a few functions were testimony to that. (However, the additional script-fu and plug-in community is actually pretty awesome, and I wish I had explored them more.)

There’s not much to engage with in terms of Jenny’s post – the basics are the basics, and there’s not much to say about it. Yes, YouTube tutorials are amazing, but once you find yourself among this league (video below), it’s probably easier to just turn off your computer and go throw a stick for your dog.

One thing I will say: LAYERS! LAYERS LAYERS AND IF YOU’RE NOT SURE, THROW IN ANOTHER LAYER! If you want to test two different types of brush strokes…use two layers! Delete the ugly one! It’s so much easier to delete a layer than to press Ctrl+Shift+Z (er, I use PCs, but I’m pretty sure it’s Apple+Shift+Z on Macs) a million times.

Finally, here’s a (repost) of the images I edited in GIMP, and its counterpart in PS. The focus should be on the colors, not the speech bubbles, because the GIMP version had me do speech bubbles in GIMP, but the PS one had me do them in Illustrator. Please note that the images are hosted by Tumblr, but are made by me. I didn’t rip off someone else’s work, but the dog isn’t mine personally. I have permission to photograph the dog, who is a minor.

P.S. It would seem that my broad “RMIT” category will soon be insufficient. If any tutor reads this before the final due date, but sees no extra categories, please note that I will be adding and organizing more specific categories extremely soon. I know in a professional space that this is inexcusable, because once it’s out it’s out. I apologize.