In this post, I will be critically engaged in the materials discovered with the Google Alert tag “Infamous” and the tag “Gaming”.

The Google Alerts that I’ve set up are the following: Comics; IGN; Gaming; and Infamous. The reason that I chose these are because, not only are these fields of interest to me, but I also follow these topics on another RSS-based platform Flipboard, meaning I can compare the results from each with my Google Alerts.

“Infamous” was chosen because it is the title of an upcoming and much anticipated video game, “Infamous: Second Son”, therefore I expect many stories on the alert. The stories which I received ranged from trailers for the upcoming game, to news on video specs, and everything in between. 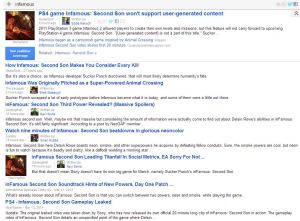 In this case, because my search term was so specific, the results that Google Alerts brought me was both on topic and interesting.

However, when I browsed through the tag “Gaming”, I instead received news that ranged from the viability of console controllers, to parents who are concerned over the impact that gaming has on their children. In terms of interest, many of the stories held little or no relevance to what I wanted, which was news on new video games. Choosing the term “video game” or “games” for the Alert tag was even worse, as for the former there were barely any interesting news on new games, and the latter brought me stories of sporting events. 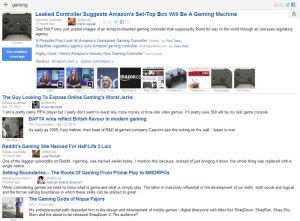 Stores that range from all aspects of gaming

This brought me to the conclusion that Google Alerts is useful when the field of interest is narrow, such as “Ukraine protests” or “Infamous”, etc. However, if the goal was to receive news on a broader topic, it is better to have an RSS-feed application where you can either choose which publications you want to feature, or have one picked out for you, such is the service of Flipboard.

The flip side of that coin, is that Google Alerts will give you specific news on a current issue in which you are interested, whereas an RSS-feed page on Flipboard for “News” will bring you everything, including issues that hold no interest.

Should I go meta and explain why I haven’t been writing? Nah, the truth is I have just been plain lazy.

I finished my assessments for Semester 1…last week, and despite the fact that it became a last minute rush, I finished to some degree of satisfaction. And now I am living in that blissful constant, where whenever I feel like I should be doing something, I don’t really have to do it.

Except, of course, I really need to get my exchange process going. Yikes.

So yesterday I watched The King’s Speech finally (obviously not in the cinemas), and I know I probably missed all sorts of auteur references and all that stuff, but the one thing that really struck me about that movie was how Helena Bonham Carter played her character’s love and support of Bertie. Without overusing physical affection, she managed to convey how much pain she was in to watch her husband stutter through his first speech, and how his victory is as much hers as Lionel’s. I think it’s a very succinct way to depict how, when it comes to monarchy, the Queen is usually pushed to the sidelines, when most of the time it’s her love and support that makes the King who he is – Helena Bonham Carter played her Queen with a quiet and determined dignity, never questioning her husband’s decisions, but always supporting him when he starts to waver.

And that’s my rant on that movie.

In other news, my friend Clem helped me get the game Portal, and I’m learning how to play it properly – kind of stink at solving the puzzle, but I think it’s a good game to get me used to FPS games.

Got my midnight tickets to HP7.2 already, and very excited to be going! I should probably start deciding if I will dress up, and if I do, how.