[Check Yes Juliet – We The Kings]

So I just saw an ad on TV for Alexandra Adornetto’s Halo and I have to clarify that, as negative as the following post might sound, I do have the utmost respect for her.

BUT DUDE! She went to school with me – she’s younger than me! And she’s already published a successful trilogy, and working on her second trilogy. She has her own Wikipedia entry – which to me at the moment is the epitome of success… – and she was in the newspaper quite a lot.

Am I jealous? Yes, yes I very much am. The ability to say “I got published when I was young” got taken by someone else – the attempts I’ve made in creative writing competitions had failed – so what have I to boast now?

Ah this is petty. She worked hard to get herself published, not to mention that she has intrinsic skills. I’ve read excerpts from her first trilogy; the writing style isn’t my cup of tea, but the fact that she has a distinctive writing style and that her stories capture publishers’ interest, it is really a commendation to her skills.

I think I’ll calm down now, and go about my life as I have done before. Things like these give me a boost in my sudden need to mark my name in the world, but they’re short lived nitro boosts. I need to work on upgrading my cart so that it maintains a strong acceleration and speed.

Ha, who knows, I might write the next “Harry Potter”. If only my imagination can be so epic…and that I can be bothered to research as deeply has Rowling had.

Here are some baby pictures of me. Since I have nothing to blog about and apparently no self-dignity in any form.

Oh crap how do you upload pictures on this new WordPress? Let’s see…

I was 2 and a bit, according to the date that was penciled in at the back of that photo. 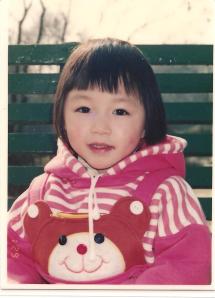 P.S. Whoever comments “aww cute” gets their comment deleted. Har. I have the power to do that.