I had to go bloody say it. Now it’s going to be awkward and weird.

Fucking hell, shut the fuck up next time! She didn’t need to know.

Hey everyone! It’s Bianca’s birthday today, and she is now legally sue-able.

Okay, so basically what happened?

This morning I made sure I was on time for the train, and gave Bee a huge hug. Fel’s mom had given Bee some chocolates, which was rather nice of Fel’s mom. Carmaine was on at Glen Waverley, looking very cool with her purple (mauve?) beret.

Spanna got on at Mount Waverley, looking very very dead. I sort of pointed meaningfully at Bee, but all Spanna did was nod at me, until I had to say, “it’s her birthday today!” to which Spanna actually responded, surprise.

Shaz was boasting about how she got her text in first. I thought I’d’ve been first, except Bee actually said she hadn’t received mine at all. My heart broke into tiny tiny tiny little emo pieces. I showed her the text from my phone. (She told me later that she’d received it at 11:56 pm…)

We got to Flinders St, and a tired looking Dom wished Bianca happy birthday (yes I commanded him to). We went to Flawless Flowers and Bee bought herself flowers (? Don’t ask). We got to the tram stop and the tram announcer, the one who sings, was there. So as we passed him Emily and I asked him if he could wish our friend Bianca a happy birthday. So he did. And then he sang happy birthday to her. We laughed all the way onto the tram.

At school, I walked into the locker bay, with Bianca already inside, and said loudly, “What’s this? It’s Bianca’s birthday today? People should say happy birthday to her?” and of course everyone like the sheep that they are bid her happiness of the day. Then, when Period 1 started for Bee, I played my trump card.

I spent an entire evening on Monday drawing up an acrostic poem/poster for Bee. I didn’t have the insight to scan it so I can’t show it to you here, but I’d basically braved death by Sharpie fumes to draw Bee an A4 sheet of awesomeness. I stuck it onto her locker. Yes, she liked it. [insert huge smiley face]

Eunice and Mary made mini pancakes during recess in the Common Room, and Carmaine Dani and I nibbled on them. Bianca sort of floated around…and then I lost her.

Lunchtime! Bee was at a Formal Committee meeting, and I at Yr 12 Video. Then when we were done, I went to find Dani and April. Carmaine joined us after a while, and took the SLR which I was mucking around on.

Bee said bye because she had frees, and Carmaine and I went to slog it off in double Methods.

After school, Catherine and April went with me to ATO, then I took the train home with Catherine.

Then, something really awesome happened: 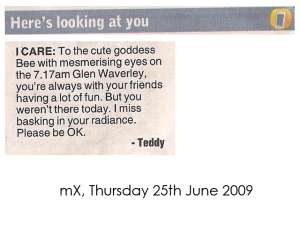 (Sorry, I didn’t scan it in properly…the date was blurry so I typed it in instead)

Whomever “Teddy” is, this is just a perfect birthday gift isn’t it? Maybe “Teddy” knew it was your birthday coming up, Princess.

And that’s about it. I know I tapered off the topic of Bee for a bit but I came back again, didn’t I?

Have a wonderful (rest of the) day, Bianca darling. Baby. Munchkins. Haha no no jokes. Have a good day and I look forward to Saturday.